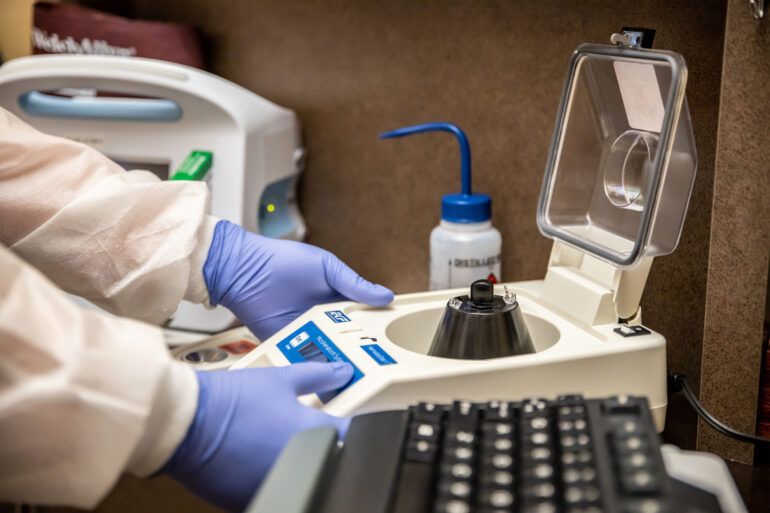 Around Town
A doctor at BioTest Plasma Center operates a microhematocrit centrifuge. Peyton Beyers | The Volante.

Plasma donations are a way for college students to earn extra money, but it’s much more than a quick paycheck and some spending money.

Biotest of Vermillion is the closest donation center, but plasma donations are taken around the nation and involve an extensive physical, Balsam said in an email interview with The Volante.

“We take the selection of our donors very seriously because we want to make sure that the donor is healthy to donate and that the donor’s plasma is safe to be made into our medicines,” she said.

All donors have to pass a physical at their first donation session, as well as get their levels of iron, protein and other vitals checked every time. Balsam said donors at Biotest are held to the safety and quality standards established by the U.S. Food and Drug Administration and European health authorities.

These regulation policies require Biotest to test every donation, she said.

Donors also need to have a valid proof of ID, proof of social security number and proof of permanent address.

“(Another difference is) because our bodies replenish plasma quickly, donors are actually allowed to give plasma more frequently than those giving whole blood,” Balsman said. “(They are able to donate) up to two twice in a seven day period, with at least day in between.”

Luckily, Balsman said, donors are able to give plasma more often than blood, because the amount of plasma needed to treat one patient is extremely high.

“It takes anywhere from 130 to 1,300 donations to treat one patient just for one year,” She said. “For many patients, the treatment with plasma medicines is their only treatment option.”

“Only plasma from repeat donors is used to make Grifols’ medicines. We want donors to go through the entire screening and donation process at least two times before their plasma can be used,” she said. “This is an extra safety step we take that also shows us that the individual is committed to being a regular plasma donor.”

The products extracted from Grifols are specifically used, Balsman said, to treat people with Alpha-1 — a genetic form of COPD — people with deficiencies in their immune systems, GBS/CIDP — an acute paralysis condition.

Because of the more extensive donation process, people are paid for their plasma donations, Balsman said.

“It takes more time and requires a commitment from the plasma donors. We do offer donor fees as a small thank-you,” she said.

Kristen Quigley, a sophomore neuroscience major, said she enjoys donating plasma while she is not competing during the swimming season. She said it’s an opportunity to earn some money, but also helps the field she hopes to have a career in.

“I just feel like being a science major, I obviously benefit a lot from research,” Quigley said. “I think other people should donate plasma because of all of the benefits it gives for people who need like plasmapheresis or just research that they’re doing. It’s really great to help other people.”

Biotest, Balsman said, encourages everyone eligible to come in and donate their time and plasma. She said everyone’s reason for donating is different, but they are all appreciated.

“For some, it’s because it’s one of the easiest ways to give back,” she said. “Some people like having an hour to themselves to relax. Some people like to earn a little bit of money on the side while knowing they are helping to save a life. You only need one reason to donate plasma.”