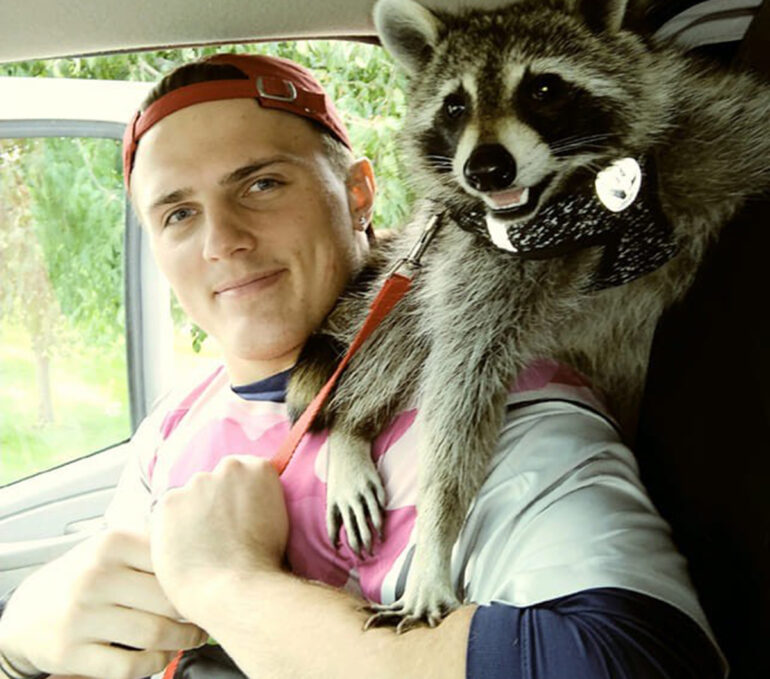 Most pet owners on campus have a dog, cat or fish, but first-year Nick Gaes has a pet raccoon named Robert. Gaes has had Robert for two years and currently lives in Coyote Village.

Gaes is a kinesiology and sports management major and plays football at USD.

Gaes got Robert from a farm in Iowa. Robert, who was one of four raccoons at the farm. The three other raccoons went to rehab facilities.

“We got him when he was two weeks old and his eyes were still closed,” Gaes said.

Raccoons are not quite the same as cats and dogs, but Gaes said Robert does share some qualities.

“He doesn’t act like a dog or a cat, but he pretty much is a dog and a cat,” Gaes said, “If he wants to lay with you, he will, but if he wants to play he will be off doing that.”

Gaes said one of Robert’s favorite things to do is snack on anything he can get his paws on.

“I feed him mostly dog food and junk food,” Gaes said, “But he eats everything.”

“Robert loves to climb. If you put anything tall up, he will climb it no matter what,” Gaes said, “He will also play fetch just like a dog.”

Since Robert is so unique, he is a popular guy in Coyote Village, Gaes said.

“The first time I brought him here, I think I had over 400 people come to see him,” Gaes said.

Freshman Colton Harberts is one of Gaes’s three roommates and said he enjoys having Robert around.

“[Robert] is very friendly and it’s so funny how much he loves Nick and climbs around,” Harberts said.

Raccoons, like any other pet, need attention and to be taken care of.

“I potty trained Robert to use a cat litter box,” Gaes said. “I just started putting cat litter in his cage and he would use it.”

Robert stays with Gaes every other week. When he is not in Vermillion, Robert goes back home to Alta, Iowa. Though they spend time apart, Robert and Gaes have a strong bond no matter how far apart they are, Gaes said.

“He needs the time to be by himself and be away from all the people here,” Gaes said, “If we haven’t seen each other in a while, he will come running to me because he knows who I am.”