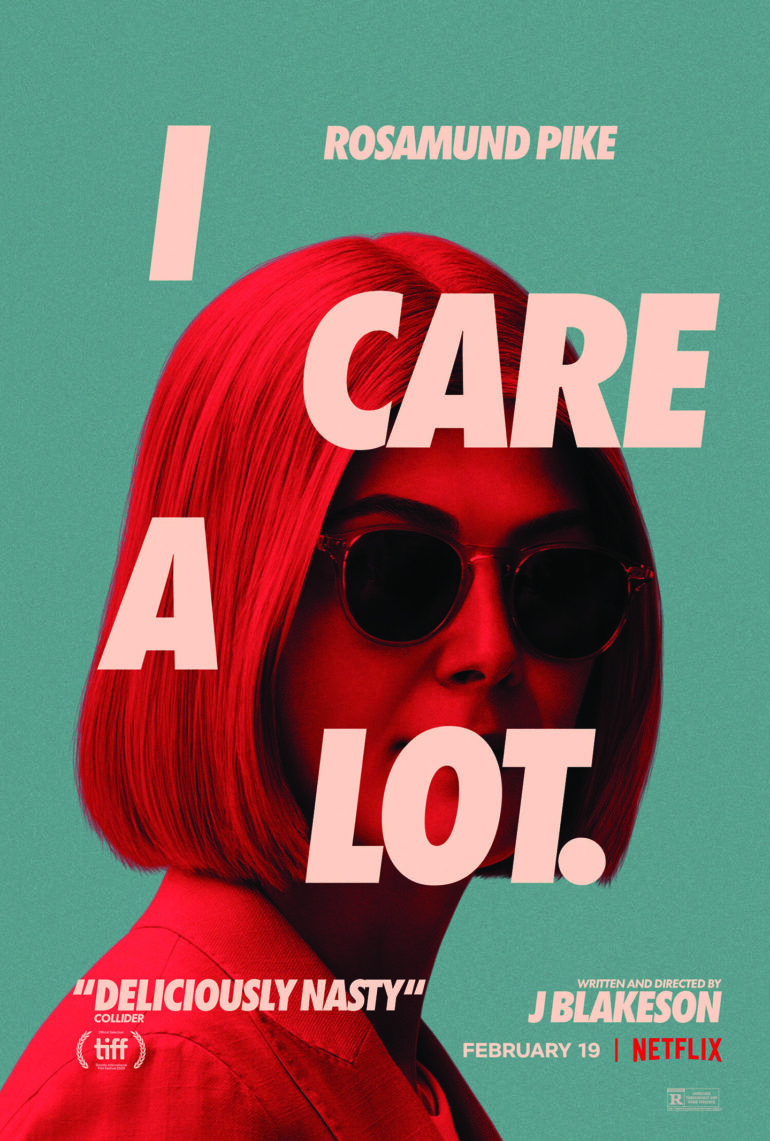 Netlflix’s new movie “I Care a Lot” keeps audiences stuck in a captivating distress as you watch probably the most unethical of people fight for what they want.

The movie follows Marla Grayson, acted by Rosamund Pike, as she continues to build her little empire by taking advantage of the elderly. When the victim gets old and develops health problems and is no longer able to take care of themselves, Grayson swoops in to become their legal guardian, taking their care into her own hands rather than that person’s family. She then takes all their assets away for herself. Her new ward seems to be an amazing find but turns out to be a huge mistake.

The whole concept of the film is dark, yet brilliant. It mirrors our own world so closely that you could believe that these crimes could be played out today. The main character technically isn’t doing anything illegal but the whole situation makes it feel like our legal guardianship should be looked at again just to make sure.

For a film with the title “I Care a Lot,” the main character Marla Grayson really doesn’t care at all, not about some of the basic stereotypes of storytelling and especially not about the ethics or morals of the characters. The film is driven by the sense that the world revolves around it, and it’s amazing.

From what I have seen in people’s reactions to this film, many people hated it because of how awful the characters were. They weren’t just evil rich people who made their fortune dealing in drugs or something like money laundering. They were taking people’s lives and people’s loved ones away from them. I guess that thought is far more despicable to an audience.

For me, I wasn’t exactly repelled from the movie by its dark nature. I found it kind of fascinating and thrilling. While there are some plot holes, it’s just a really clever film that makes its own rules.

The character Marla Grayson is probably my favorite part of the film. She has such an organized way of doing things and is extremely determined. There aren’t many leading conwoman films out there—at least not done as well as this one. The last one I can think of would be “Ocean’s 8.”

The aspect of Grayson’s character that was shocking to me was how she was a conwoman with the inhumanity of men we typically see in these types of movies. She is used to getting what she wants, she demands respect, and she does it at the expense of others. But she deviates from most conmen by following the rules and playing the system she’s in.

Also amazingly, the film has great representation of a lesbian couple. It’s not acknowledged as shockingly lesbian, and their relationship isn’t toxic, it just exists and it’s perfect.

Peter Dinklage plays the antagonist Roman, who could be argued as a worse person than Grayson, but his motivation for his acts in the film are forced to be sympathized with. It’s almost cruel to the audience to have to overlook such awful actions and focus on the ones that are just presented in the story.

The ending of this film is unexpected and satisfying, but also unsatisfying in the same way. It’ll be up to the audience to decide how they wanted to see the story end.