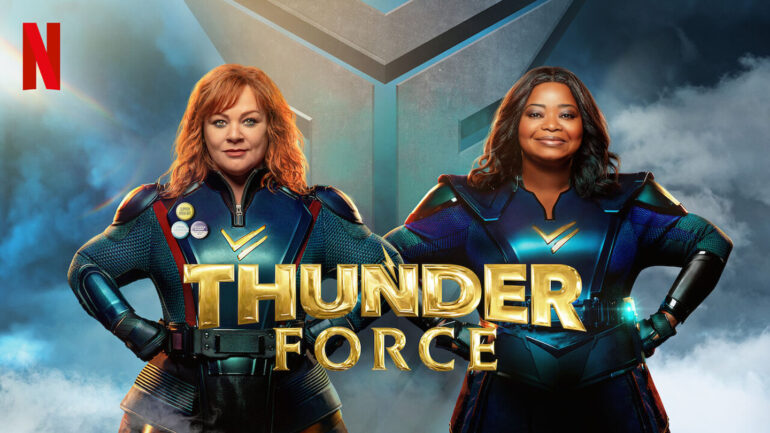 Melissa McCarthy and her husband Ben Falcone recently released another one of their lazy movies to Netflix, and sadly, they brought Octavia Spencer into this project as well.

Despite the movie being named “Thunder Force” there was no drive in it.

The movie follows two estranged best friends who come together as a superhero duo to fight the evil that has taken over the city of Chicago. The criminals are referred to as miscreants and the reason they have superpowers is due to the blast from space that hit Earth and only affected people who were predisposed to being psychopaths.

The movies McCarthy has been making with her husband, Ben Falcone, remind me of Adam Sandler’s movies; just rich people making underdeveloped movies that can only be marketed to kids. I’m the first to not have a desire to watch any of Sandler’s kiddish movies he likes to put out, but when compared to McCarthy’s at least his are more than just two ideas being thrown together.

The sad part is that her movies tend to have good premises, like this one.

I would have loved a superhero movie about middle-aged, plus size woman proving to the world she is strong and has what it takes to fight evil, but this was just a bunch of first level ideas with no depth which came off lame and almost annoying to watch.

With a movie that has a very good and well known cast, this movie fails to showcase any of their talent. Knowing Octavia Spencer’s filmography and recent work I’m surprised she agreed to something as undeveloped as this. This whole movie is a stain on anyone’s career who was apart of it.

I swear Falcone and McCarthy only had two ideas and just wanted to put them together. Two female lead superheroes, and a man that is a half crab, it doesn’t make sense and it really shouldn’t. And I’m still unsure if it even worked in the end.

The beginning of the movie is almost enough to give up on it. It was extremely slow and was a bunch of unhumorous improv from McCarthy, which ended up being cringey. It finally becomes worth giving at least half your attention to once the movie remembers there are miscreants to fight.

The reason McCarthy’s character, Lydia, even gets powers is because she can’t listen to the one rule given to her. She is asked to not touch anything and then touches everything. She’s an adult that was trying to make good with her old friend and she can’t follow a simple rule; I would have rather her slipped on a banana and fall into getting her powers then her just being rude.

The movie is also very predictable and has very little action for a movie centered around superheroes, which you are expecting some good fights. In today’s age you can’t just throw together a superhero story and expect people to watch just because they have powers, we have Marvel for that.

There is honestly too much to complain about this movie, it is not worth your time. I just hope after this McCarthy and her husband Falcone should either stop working together or start putting some actual thought into their projects.