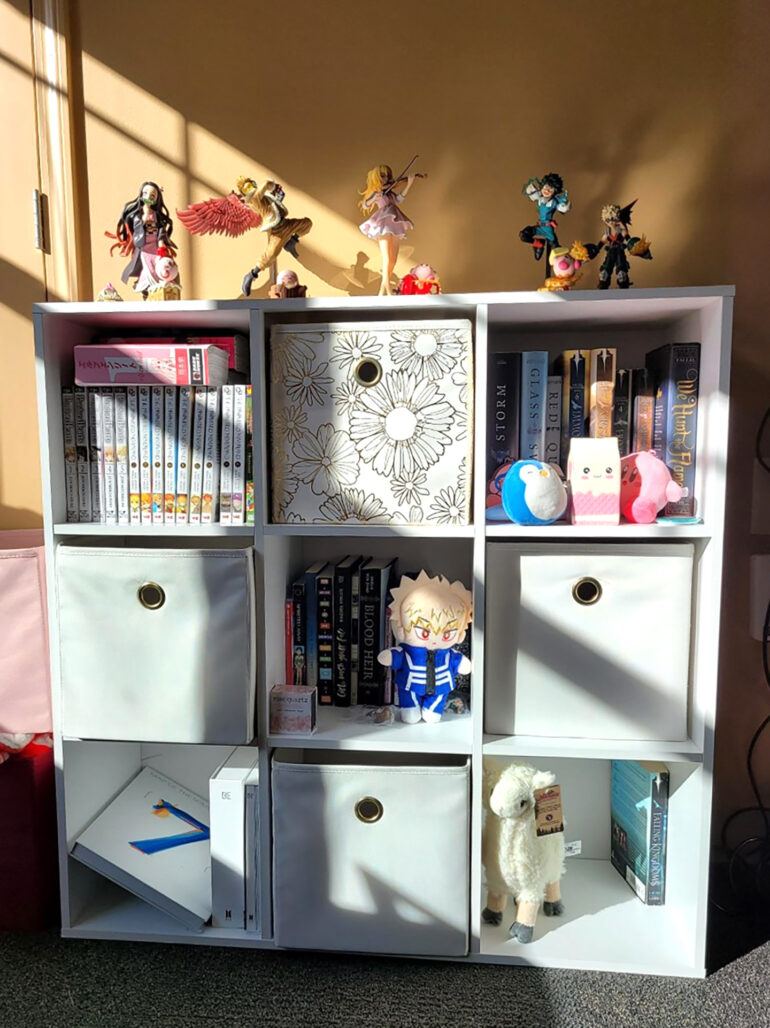 Feature
Cheyenne Nikolaus displays her ‘Manga’ collection of books and anime figures on her living room shelf. Submitted | The Volante

Paller said he has been collecting Hot Wheels practically since birth.

“I never got bored of it, and then a few times growing up my mom was like ‘wow like you’re 13 or 14 want to maybe put these in the attic,’ and I was like ‘why would I do that, why would I do such a silly thing, I’m having fun,’” Paller said.

Nikolaus said she unintentionally gained an interest in anime when her mother accidentally bought her a pack of 10 Japanese comic books called manga.

“I read all of them, and then I read them over and over again, and then I found out later this is a thing (anime),” Nikolaus said. “When I was about 14, I started collecting my own. I went to Barnes and Noble intentionally looking for these and I started buying them.”

Paller has around 2,000 to 3,000 Hot Wheels in his collection and he stores them in wicker baskets, display cases, shelves and shoe boxes.

Hot Wheels cost 97 cents. However, some of Paller’s Hot Wheels collectibles are worth a lot of money. Paller said he has one from 1971 that is worth between $400 and $500.

“Depending on what car it is, what condition it’s in and the color of it will determine the value of it,” Paller said. “A lot of cars in hot pink or purple color will sometimes be worth more because less of them were sold.”

Nikolaus said anime can be different types of genres ranging from romance to horror. Even the movie “Frozen” has been adapted to the format.

“I mostly collect manga books. I have about 33 volumes in total,” Nikolaus said. “I also have the little figurines, they’re like action figures but you don’t play with them, they’re for display purposes.”

An individual book from an anime series is typically $10 and a figurine can range from $25 to $50. Along with manga books and figurines, Nikolaus also collects anime apparel.

“They’re just so pretty, I like the way they look on my shelf, they look so nice, organized and the art is so gorgeous,” Nikolaus said.

Paller said he doesn’t plan to stop collecting Hot Wheels, and if he does, it will be because he just forgot about them.

Nikolaus said her favorite thing to do is to go back and reabsorb all the details from her Manga collection.