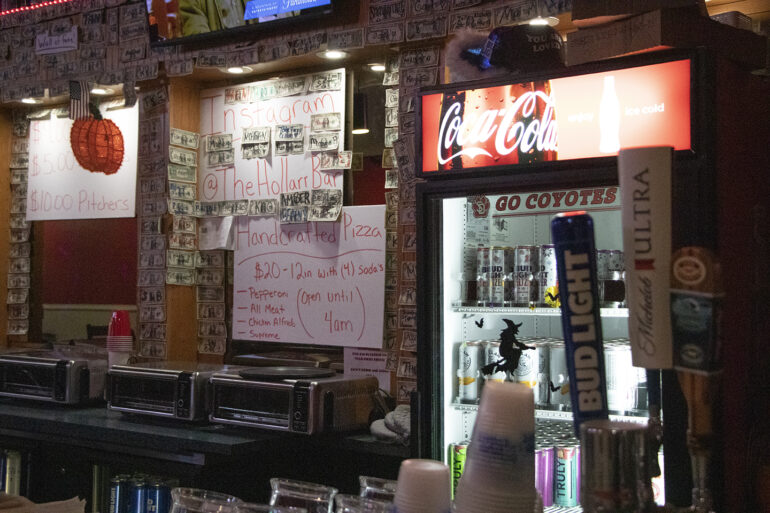 Around Town
Hollarr Bar opened right before Dakota Days and owner Patrick Mesar plans to add things to Hollarr that other bars in Vermillion don’t already have. Rachel Thompson | The Volante

EDITOR’S NOTE: In a previous version of this article, The Volante misspelled Patrick Masur’s name as Patrick Mesur. The Volante regrets this error.

With a multitude of bars in downtown Vermillion, a new one has entered the arena. Hollarr is a new bar that opened just before Dakota Days and is owned by Patrick Masur.

Masur is 26 years old and owns two other businesses. He runs snow removal services in Sioux Falls and a jet ski rental business at Lake Madison.

“I’m always looking for opportunities, and just think it would be a good opportunity to have a bar here in Vermillion and to change it up a little bit,” Masur said.

The space was available, and when Masur found out he was able to make a deal with the owner and have it open within a three-week span, Hollarr was opened just before Dakota Days.

“I found out about it from a friend of mine here in Vermillion. He told me about the bar being for sale, and I just saw that there was a need for another bar here. I want to kind of add some pretty cool things that no other bars do around here,” Masur said.

One of Masur’s ambitions is to add a mechanical bull.

“We don’t have a lot of room to work with, so the size right now is what I’m dealing with. For the liability portion, everybody’s got to sign a waiver, of course, and then I’m only gonna do it a couple days out of the week,” Masur said.

Hollarr does not currently have a liquor license and is only able to sell beer and seltzers at this time.

“I have a great neighbor, the Main Street Pub, customers can go over there and get liquor, and then come over here to dance and get beer,” Masur said.

Recently, the bar has added home made pizzas to their menu. Hollarr’s kitchen is not currently finished, but there are toaster ovens behind the bar.

Masur also has the bar stay open until 4 a.m. Pizza sales continue until then, but the bar stops beer and seltzer sales at 2 a.m.