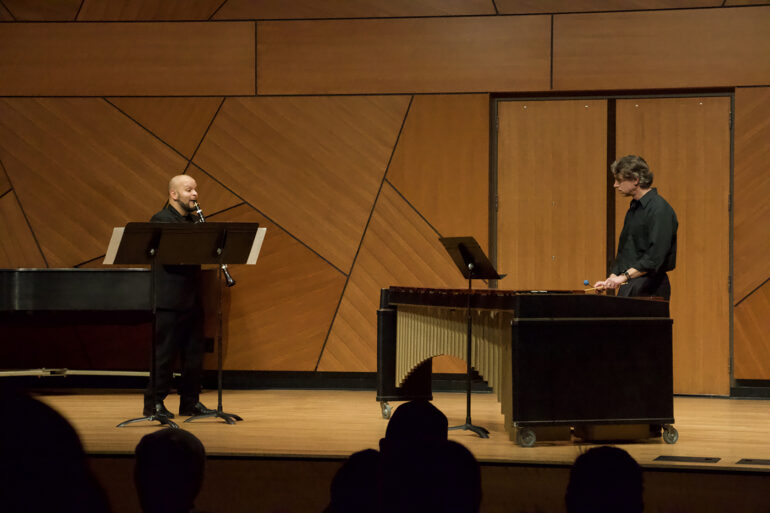 Eight composers and 11 performers made up the South Dakota New Music performance Monday night inside of Colton Recital Hall.

The show welcomed an in-person crowd and was livestreamed on the Department of Music’s website. In total, there were three world premieres, including a piece made by assistant professor Paul Lombardi, who was the artistic director of Monday’s show.

New music is considered music created within the last 50 or so years by living composers generally. USD tries to put together a show like Monday’s performance once a semester.

“We had a great turnout last semester, it was probably one of our biggest turnouts, and it was our longest concert,” Lombardi said.

While Monday’s performance, starting with Luis Viquez and Darin Wadley’s performance, was shorter than last semester’s show, there was still a good crowd for a unique showcase.

“Not everybody likes new music,” Lombardi said. “Sometimes it challenges them to hear things in a way that they hadn’t thought about before. Generally, the people that come to these concerts respond positively.”

USD isn’t the only school that performs new music, but USD’s show is unique in how the show is structured.

“A lot of universities, they have a new music ensemble, a group of players that will do the whole concert,” Lombardi said. “That format hasn’t really worked here, so we have a new music series, where we invite students, faculty and local people to be a part of it.”

Lombardi also thanked the help of other professors at USD before the show.

“We have other people who have been instrumental in this too, Wadley and Viquez,” Lombardi said. “Our professors are always involved, and a lot of times, Amy Larson and Todd Cranson also bring a lot of new music to the community, so they’re playing tonight (Monday).”