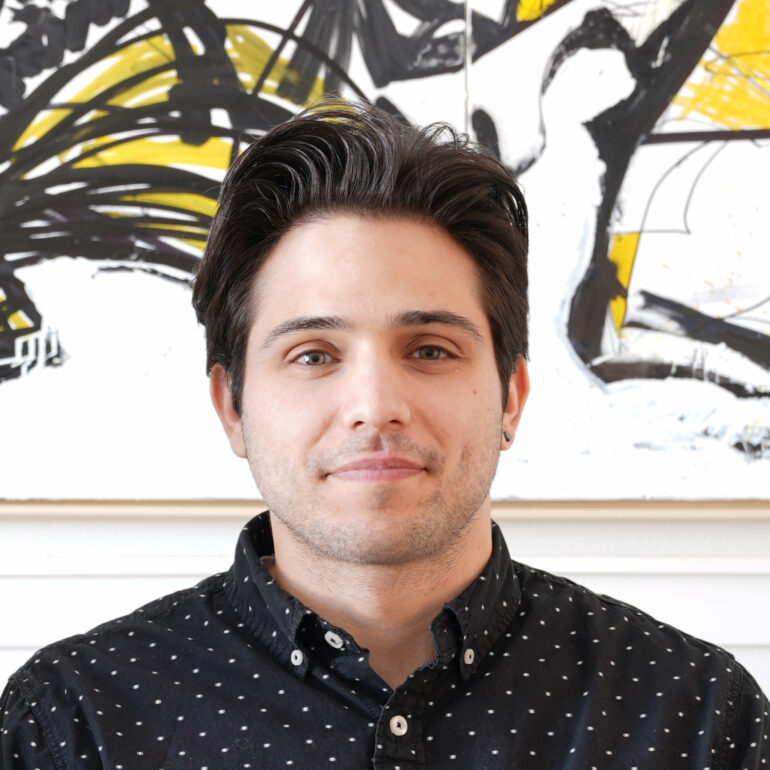 Joe Schaeffer’s dream of a career in dentistry died at a convenient time: the end of high school. He scraped through his last semester of science classes and to earn a diploma, but entered that summer with little time to decide on a subject to pursue.

That was when he found his father’s portfolio from an art class at a tech school years before. It clicked. His father never pursued the arts, but Schaeffer ran with instinct and enrolled as a graphic design student at USD. 11 years later, he now co-owns a design firm in Sioux Falls: THAW.

“He was a very diligent student and always looking for opportunities to grow as a designer,” Kim said. “I really respect his work ethic and diligence.”

The two first crossed roads a typography class Kim taught in 2010. Following his graduation in 2013, Schaeffer worked as a designer at Lawrence & Schiller in Sioux Falls for three years. He then returned to USD to complete an M.F.A. in graphic design in 2016, during which he taught a handful of classes from Publications Design to Brand Identity. In 2017, Kim gave him a call and proposed they kickstart their own design firm: thus was the birth of THAW.

Together, Kim and Schaeffer cover a vast stretch of ground. Kim started a design firm in her hometown of Seoul, Korea before moving to Los Angeles and then to Sioux Falls. She’s abundant with international connections and works with brands like Nike, Samsung and New Balance. Schaeffer handles the local side, crafting designs for companies such as Sanford, helping local artists brand themselves — which Schaeffer said is “very meaningful work” — and painting for commission.

“We do a lot of self-initiated projects too, just stuff we want to create that will make us better designers,” Schaeffer said. “It’s really just work we want to see, and we don’t hesitate to go for it.”

From the outside, THAW can appear as a high-end design firm catering to big corporations with high visual standards but Kim said Schaeffer’s role is vital in establishing and maintaining connections within the locale.

“I quickly realized people here tend to rely on people from this location; they build up more trust toward those people rather than someone like me, from outside the area,” Kim said. “I told Joe, ‘You’re from here, and it will be much easier for you to build relationships with people in Sioux Falls.”

Schaeffer’s biggest stamp on USD came before he returned as a graduate student. USD had just erected a 7,000 seat arena attached to the DakotaDome and needed to decorate the gray interior. Ivy Oland, who undertook the environmental design at Sanford Heart Hospital and the Denny Sanford PREMIER Center in Sioux Falls, brought Schaeffer onto the eight-month endeavor, one about encapsulating the “go-ers of the space,” the spirit of the Coyote fan.

“We really wanted to uplift the certain energy that’s created amongst the crowd in support of whatever team is playing,” Schaeffer said. “We wanted a lot of crowd shots and student shots, basically giving it a sense of place through that approach. It was really about supporting the sense of community-generated in those games.”

Schaeffer spent the last week on the beaches of Palm Springs, California with his wife, celebrating a delayed honeymoon after their wedding last summer. When he returns he said he’ll begin work on his favorite project: whichever one he’s currently working on.

“Any project that comes to me, I can immediately feel the potential and possibility in it, and that excites me,” Schaffer said. “That’s what keeps me going. That’s what gives me energy.”