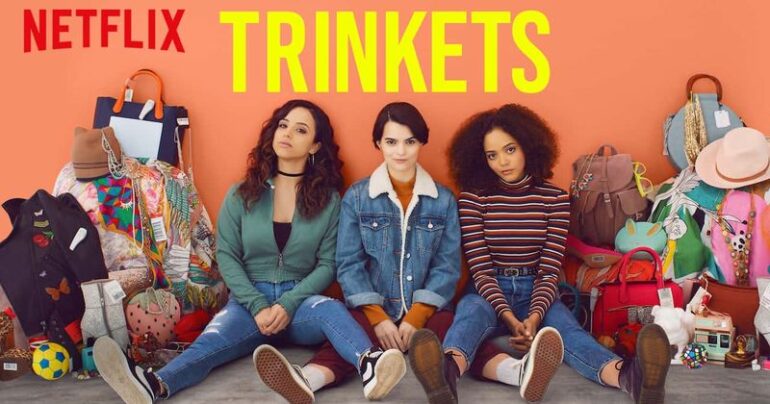 Starting a new TV show that has six seasons already out is very daunting. So when I find a new show with shorter episodes, up-and-coming actors and a story I haven’t seen before —  it sounds great to me.

“Trinkets” is about three girls who wouldn’t have become friends, but did after they all ended up in a shoplifter’s anonymous group.

This show didn’t fit in a box — each of the main characters had actual personalities, actual stories to tell. To go with that, the actors did a great job showcasing these amazing characters.

The bond between the characters Elodie, Tabitha and Moe was real on- and off-screen.

One of the main topics “Trinkets” tackles is toxic and abusive relationships. To the people around her, Tabitha’s life is perfect. Even her family and friends can’t see the tension she holds when she is around her abusive boyfriend.

Teenagers don’t necessarily like telling their parents or an adult what’s happening in their lives. Tabitha would repeatedly give her mother signs of the toxic relationship she was in. She would say she didn’t like Brady, that Brady wasn’t the one for her — and her mother ignored them thinking teenage lives aren’t complex.

Luckily with her new friends, she finds the courage to break up with her abuser and find herself. The aftermath of their break up shows how toxic Brady is as he continually tries to manipulate his way back into her life.

This is just the tip of the iceberg of all the complex ideas present in the show. Probably the best part, however, is that you could binge-watch this in two days.