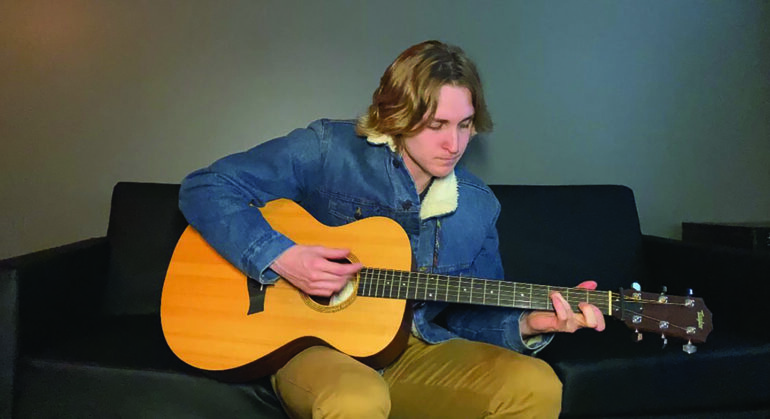 Campus
Student athlete and junior, Griffin Wolner, balances his activities while pursuing his passion for music. Submitted | The Volante

Recently, USD’s Griffin Wolner auditioned and received a call back from the reality TV show, The Voice. This talented, student-athlete has more than one trick up his sleeve as he balances schoolwork, sports and his passion for music.

Wolner is currently a junior at USD studying medical biology and minoring in psychology. Originally from Winona, Minnesota, Wolner said he came to USD because it offered everything he was looking for.

“They allow me to be a med bio student while being a student athlete which is huge,” Wolner said.

Wolner competes for USD’s swim team, but that isn’t the only talent he has. Just a few months ago Wolner auditioned for The Voice, but it wasn’t always a plan he had in mind.

“When I was a kid I used to watch shows like American Idol and The Voice and things like that but I never took it too seriously about auditioning,” Wolner said.

Wolner said that part of this was due to his already busy schedule but he had a lot of support telling him to go for it.

“I had lots of good friends who kind of told me you know just try it out, you might as well see what happens,” Wolner said.

One friend in particular made the first suggestion to audition for The Voice and has always supported Wolner.

“My friend Payton Ryz was one of the first people who suggested in auditioning for The Voice, she always has such a high and excited energy and really pushed me to do it,” Wolner said.

Wolner said he actually auditioned without telling anybody but once he found out he made it past the first round he was overjoyed to let his roommates know.

Due to COVID-19, The Voice had to alter their methods of judging for these auditions. Instead of being in-person, auditions were held online. Wolner said this actually made it easier for him since traveling to do an audition would be difficult with his schedule.

“They opened it up and you send a video in and within the next 20 minutes somebody watches that video and lets you know if you’re going on to the next round,” Wolner said.

Wolner has already submitted his second round of auditions where he had to send in three full covers.

Wolner’s passion for music was evident at a young as he spent around three to four years doing piano lessons. After that, Wolner said he began to enjoy playing different instruments as well.

“I kind of just like picking things up as I go and learning new things about myself,” Wolner said.

Wolner can sing as well as play the guitar, piano, banjo and ukulele.

Wolner credits a big part of growing and learning about his music to his decision of coming to college.

“It made it easier to focus on writing and making it better as I went on and then I started to show more people and gain more confidence,” Wolner said.

Wolner didn’t just gain support, he also gained a friend who is just as talented as he is.

“Charlie Babcock works on the technical aspect of all of my music and does all the recording and mixing of my songs, he also helps in finding the right sound and puts a lot of work into his input as well,” Wolner said, “He’s super talented at what he does and is so fun to work with.”

One thing Wolner said he is going to take from this experience is a new perspective.

“COVID has made this year seem not so ideal but I feel like there’s always bright spots in between the darkness,” Wolner said.

Wolner also said just because something negative is handed to us does not mean that’s how we have to perceive it.

“I’ve had a pretty enjoyable year and even though it’s been different it doesn’t mean it’s bad, you can find good spots too, good music and lots of good friends,” Wolner said.

For any students who also has a passion for music, Wolner encourages each to embrace it.

“No matter the direction you go with life you can always take music with you, and I think that’s a really special thing,” Wolner said.

For those interested in checking out his music you can find it on Tidal, Deezer, Apple Music, iTunes and Spotify.