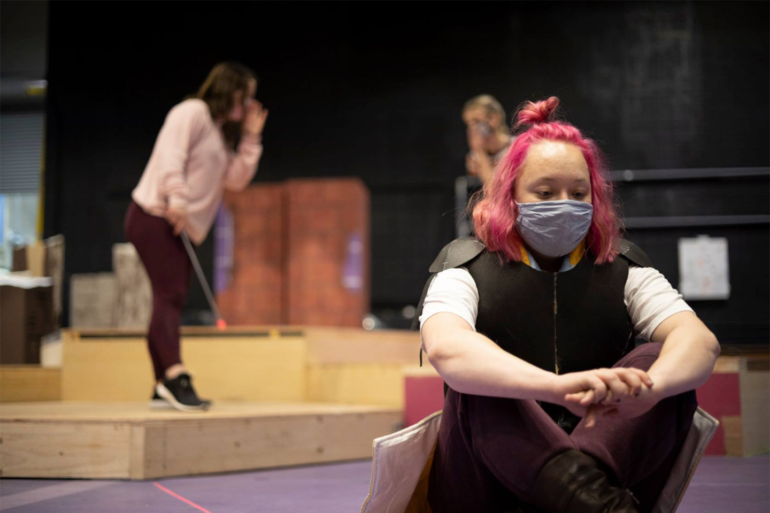 Events
The play will premiere via livestream at the Knutson Theatre April 22-25. Submitted | The Volante

The upcoming USD production of She Kills Monsters empowers women through adventure and growth. Premiering via livestream at the Knutson Theatre April 22-25, She Kills Monsters brings strong, complex LGBTQ+ characters to the stage.

Dowell said her character builds strong relationships between the other characters in the play and builds a community on stage.

“We have done a lot of journaling work and (Campbell) has encouraged us to think about a lot of different aspects of the show and our characters and this has helped us to develop unique relationships with each other that are true to the story,” Dowell said.

She Kills Monsters was written by Qui Nguyen and centers around Agnes who has lost her family in a car accident. The plays combines reality and fantasy to empower the female and LGBTQ+ characters.

Sanders said her character brought new challenges to the role.

“One challenge that I’ve faced in my role is portraying a character who isn’t an everyday human being, but instead, a creature who exists because of a game,” Sanders said, “It’s forced me to find a new approach to knowing my motives for the choices I make and the things I say.”

Since the production faces heavy topics such as sexuality, Dowell said Campbell’s directing has helped her to separate herself from her character.

Sanders said she enjoys being part of She Kills Monsters because it is a new type of play at USD.

“This is definitely a stand-out production at USD because it includes themes of female empowerment, mourning, and the LGBTQ+ community,” Sanders said.

Sanders also said the play has been a learning experience about energy and performing as an actor .

“I’ve learned that theatre is really built on energy; the energy of one person can affect everyone around them and can affect the quality of the performance and the energy of an audience can have a tremendous amount of impact,” Sanders said.

To learn more about the production or to attend the livestream performances, visit usd.edu/theatre.