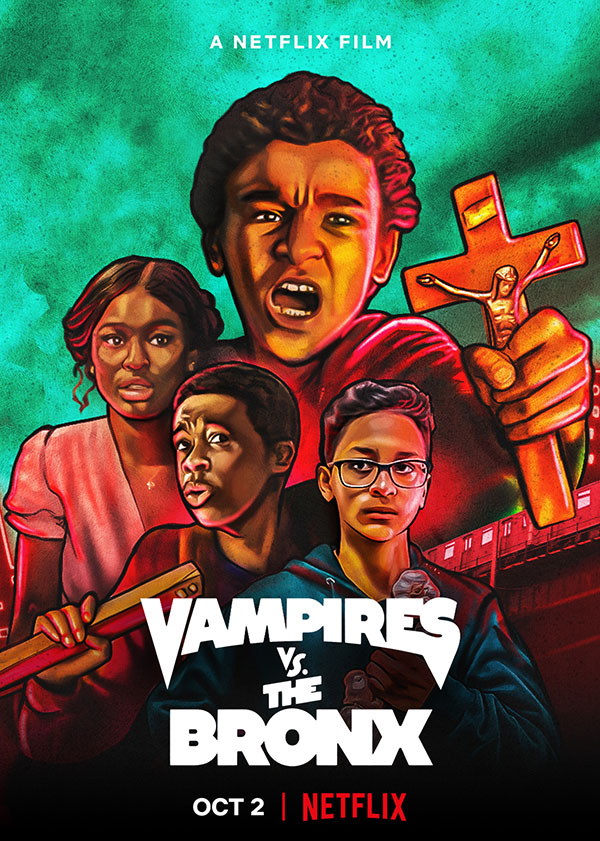 In “Vampires v.s. the Bronx”, “The Goonies” came to 2020 and this time, focused on gentrification and properly representing different cultures.

The story follows three young boys living in the Bronx. One — the leader — Miguel is trying to save his local Bodega and save his neighborhood from gentrification. Along the way he finds that the people trying to take over the neighborhood are vampires. So obviously being a kid that adults don’t listen to, he and his friends take it upon themselves to save the Bronx.

It was refreshing to see a predominantly black cast and was amazing to see how effortlessly the movie represented the area it portrayed.

Also two of the main characters and a lot of the supporting cast are Black Latinos and the movie was able to represent both cultures very well as Hollywood tends to ignore the Latino side of many Black characters today.

The first half of the movie started off really strong. The chemistry between the three main actors helped give the movie energy and their characters more depth.

The world this movie created didn’t feel like an intangible place. They really emphasized on the sense of community the Bronx has and made the threat of gentrification feel greater and urgent.

The comedy felt natural in the beginning of the film and the set up for the story didn’t feel forced. As the film went on the story telling became more simple and felt coincidental.

With “Vampires v.s. the Bronx” being a low budget film, the effects of the vampires were not the greatest. It took me out of the film a few times with some of the weird editing.

About halfway through the film they started adding all these subplots. For example they suddenly added the factor of it being a coming of age film, and a drama factor to it that didn’t land well.

One of the subplots that really went nowhere was the subplot of a kid being talked into a gang.

It was the only subplot that didn’t have any comedy element to it, and made it feel kind of forced and a little out of place. In a bit of a spoiler, instead of continuing and developing the subplot they just killed it off — all that forced drama for nothing.

The dialogue started to become less funny and less natural. The jokes became cliche and the climatic speeches felt like something I had heard before.

The three main characters were keeping the film alive and then out of nowhere a female character was forced into the spotlight without any real focus on her before. She just kept coming in and out of the film and not really having a spot set in stone.

Overall it was something fun to watch and felt like a little break from reality, even though it still talks about relevant issues of today. Seeing some new young POC actors and a splash of vampires are the reasons to watch this film.